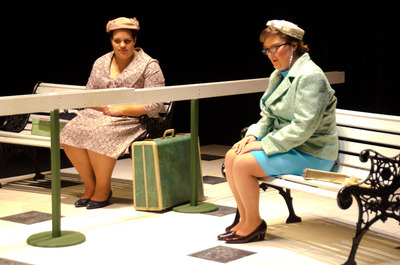 Florence opens as a middle-aged black woman walks on stage and sits down on a bench on the "Colored" side of the railway station waiting room. A low railing separates the setting into a "White" waiting room and a "Colored" waiting room. A young black woman follows behind the older woman and immediately begins to chide the older woman about their early arrival. The younger woman is Marge, who tells her mother that she must force Florence, Marge's sister, to come back home because her son needs her. Mama and Marge also exchange some words about the rent, which is going to be late because the money is being used to try and bring Florence home. Marge reminds Mama to eat the lunch that was packed for her and buy coffee for her lunch before she boards the train, since black passengers are not permitted to enter the dining car. Before she leaves the station, Marge tells Mama that Florence must be forced to return home. Mama reminds Marge that Florence was in a play for two weeks, but Marge replies that her sister's role was as a maid, which only reinforces Marge's argument that there is no future for a black woman as an actress. After Marge leaves, the porter walks in and begins to mop the floor on the white side of the waiting room. He asks Mama if she is going on a trip. When Mama replies that she is going to New York to see Florence, the porter responds that his son in Atlanta saw Florence in a colored film. This is further evidence that Florence has had some success as an actress. The porter next warns Mama that if she needs to go the bathroom, she must use the colored men's bathroom, since the bathroom for colored women is out of order.

At that moment a well-dressed white woman, Mrs. Carter, comes rushing in and immediately begins to give the porter orders, addressing him as "Boy!" After being reassured that the porter will watch her bags, Mrs. Carter sits down on the white side of the waiting room. Mrs. Carter begins to speak to Mama and explains that after only two days in this small town, she is bored and eager to return home. She insults Mama by asking if she lives in the small town that has her "bored to tears." Mrs. Carter explains that she has only come south to cheer up her brother, whose most recent novel has earned such poor reviews that he has given up writing. When Mama explains that she has never heard of this novel, Mrs. Carter begins to explain the plot, which involves a light-skinned Negro woman who is smart and ambitious but who commits suicide because she is not white. Mrs. Carter explains that all blacks are filled with self-hate because they are not white. When Mama challenges this view of blacks, providing examples of light-skinned blacks who are quite happy and successful, Mrs. Carter abruptly stops the conversation and insists that the subject is too controversial to discuss with a black woman. Mrs. Carter seems genuinely distressed to have upset Mama and tries to reassure her that she is not a racist. She even claims to have "eaten with Negroes." When Mama begins to ignore Mrs. Carter, the white woman sits for a few minutes pretending to read a book, but soon enough she tries again to engage Mama in conversation. In response to Mama's explanation that she is going to New York City to see her daughter, Florence, who is performing on the stage, Mrs. Carter assumes that Florence is a singer, saying, "You people have such a gift" for spirituals. When Mrs. Carter learns that Florence is a dramatic actress, she begins to express pity for Florence, whom she thinks must be pathetically depressed over having chosen a career at which she cannot possibly succeed. Mrs. Carter is also an actress, and she has not had much success. She cannot conceive of the possibility that a black woman could have either talent or success.

When Mrs. Carter brags about all her contacts on the stage, Mama asks if there is any way that the woman can help Florence. Mrs. Carter is quick to say yes and explains that she can get Florence work with a woman who is a writer and director. Mama is excited until she learns that the work Mrs. Carter is proposing for Florence is as a domestic servant, cleaning house. At this point, Mama becomes so upset that she grasps Mrs. Carter by the arm, alarming the white woman, who suddenly understands that she has upset Mama but does not know how. Mama tells Mrs. Carter that she should go back over to the white side of the waiting room, and Mrs. Carter quickly retreats into the "White ladies" bathroom. Just then the porter enters to tell Mama that the train is almost at the station. Mama writes something on a piece of paper and puts the note and the check that she was carrying to pay for Florence's return ticket home from New York into an envelope. She asks the porter to mail the envelope for her and tells him that the note to Florence tells her to "keep trying." The play ends as Mama leaves the stage.