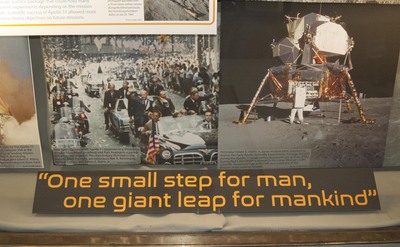 Likely the most famous space mission of all time, Apollo 11 landed the first humans on another celestial body. Millions of people around the world watched the crew of Armstrong, Aldrin, and Collins as they undertook the most daunting journey the world has known. On July 20, 1969 the world witnessed the fulfillment of President Kennedy’s promise to land an American on the Moon before the end of the decade. With strong federal backing, NASA rose to the occasion. In addition to mission details, the exhibit displays some of the most historic images from the Apollo 11 mission.