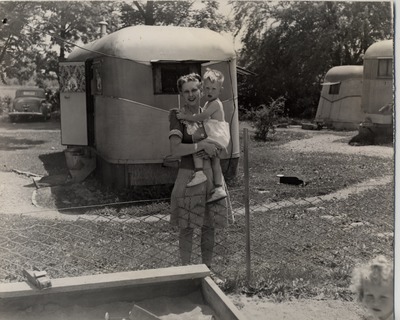 Black and white photograph of a woman holding a young child in "Trailerville," a housing area set up after World War II for married veterans, and located directly across Fourth Street from the Health Education Building (McAfee Gymnasium). Date of photograph is approximate. Trailerville was displaced by Lincoln and Douglas Halls, which were completed in 1952.

From Norma Winkleblack’s Buildings and Grounds of EIU (Historical Data): A trailer community, known as "Campus City," it was located at Fourth and Grant Streets in the area now occupied by Lincoln-Douglas Halls and Stevenson Tower. Beginning in 1945-46, it comprised 59 trailers to house returning student war veterans. The 24' x 7 1/2' trailers were heated by kerosene stoves. The rent was $10 per month. Trailerville had its own governing council and "mayor."