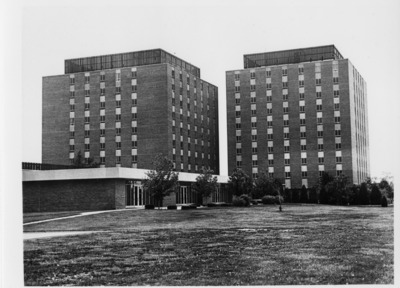 Black and white photograph of Carman Hall, two free-standing residence hall buildings, one nine-story and one ten-story, located at the corner of Ninth and Edgar Streets. The two wings of the building are served by a common dining service.

Named in honor of Ruth Carman, who taught Latin and German in the Department of Foreign Languages from 1914 to 1953; believed to be the first former student for whom a building was named. Construction completed in 1971; closed as of summer 2013.