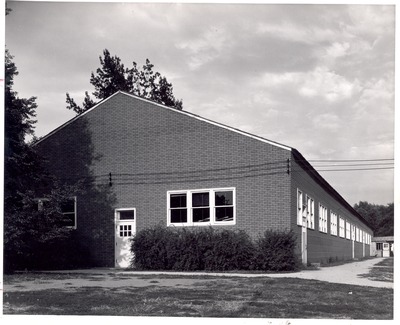 Black and white photograph of a WWII surplus building located south of the power plant, used as a temporary library during the construction of Booth Library (1948-1950) and as the elementary training school (1953-1958).

From Norma Winkleblack’s Buildings and Grounds of EIU: “A 51' x 218' structure constructed in 1947 on the west side of Seventh Street opposite Grant Street, it served as the library facility until the completion of what is now Booth Library. … Before being demolished, it served as the Laboratory School while Buzzard Building was under construction in the late 1950's.”