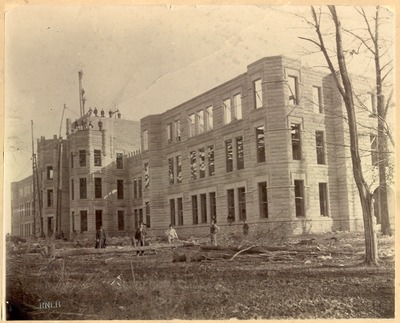 Eastern Illinois State Normal School under construction. The building was later named the Livingston C. Lord Administration Building, after Eastern's first president. However, today it is usually referred to, simply, as Old Main. Date of photograph is approximate. The building was under construction for about four years, and was completed in 1899.

Black and white photograph believed to have been taken by Anton Berner (partial name stamp in lower left). Angle view from northwest, with several men posed in front and on top of building. Size of original matte print is 8 x 10 inches.