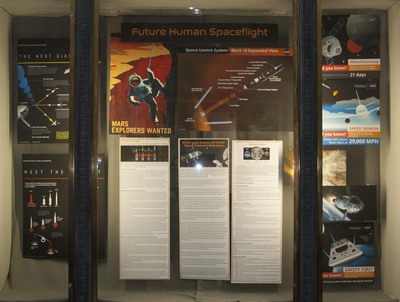 We stand on the brink of another great leap in space exploration as NASA builds and tests its Space Launch System (SLS). The new rocket does not replace the retired space shuttle fleet, it surpasses it! The much loved space shuttle ferried crews and equipment to low-Earth orbit on 135 missions over 30 years. After a long service life the shuttles retired leaving the United States without the ability to launch astronauts into space. The SLS is a new system more reminiscent of the Saturn V rockets of the Apollo missions, and for good cause. The SLS mission is to deliver crews and equipment beyond low-Earth to the Moon and beyond, destinations the shuttle could never achieve. The technology of SLS and the Orion crew and service modules are among the most incredible accomplishments of our generation. Learn the basics of SLS and Orion in this introductory exhibit then follow NASA updates as we draw ever closer to launch of these new systems!