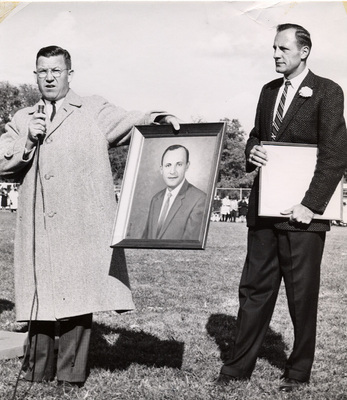 Black and white photograph of Tom Katsimpalis, assistant to the athletic director, being presented with a portrait of himself, to be hung in Lantz Gym in honor of his election to the NAIA Helms Hall of Fame, by athletic director John Masley.

An All-American basketball player at Eastern in the early 1950s, Katsimpalis joined the faculty in 1959, later serving as Athletic Director until 1974 and professor in the Physical Education department until his retirement in 1986.